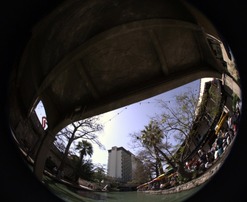 It's long been my dream to explore Texas in a new and fascinating way, and to take as many people with me as I can. We're filming The Skylines of Texas in an immersive dome format, so you can truly experience the State of Texas like you never have before! In The Skylines of Texas, you won't sit and stare at a square screen like most films - you'll be surrounded by Texas' splendor; completely immersed in an exploration of the Lone Star State's most fascinating features. We'll explore the harsh Chihuahuan Desert and take you to the beautiful Sam Houston National Forest. You'll be surrounded by breath taking (and dizzying) vistas from the Guadalupe Mountains and see things at sea level from Padre Island National Seashore. View the universe from  from McDonald Observatory - in a spot so remote that it has the best view of the night sky from the lower 48 - and learn about our universe as they investigate Dark Energy with project HETDEX. Journey across Texas' beautiful grasslands, and feel our state's pulse as we explore the second largest city in the United States. This planetarium film is a genuinely unique way to see our state from a crystal clear perspective, with the use of the newest and most innovative technology available with high resolution digital video and dazzling still photography time-lapses (Estimated length 40mins).

From Skylines Director/Producer Logan Gilpin
Texas is big in many ways, in its economy, and in the different topography. To capture the diversity, icons, culture and historical places

Logan Gilpin was born and raised in Fort Worth Texas. In his sophomore year of high school, he acquired a position as a sound engineer at the Ridglea Theater music venue. There he learned the skills necessary for accommodating and negotiating with nationally recognized artists and singers such as The Flaming Lips, Old 97's, and Drowning Pool. He negotiated on the sound and lighting technical requirements for their performances. In 2002, Logan was hired by Dallas Fort Worth based NBC where he gained experience with broadcast video, shooting commercial spots, directing live broadcasts for special events, as well as shooting the test pilot series “True Life” for MTV. When the NBC station upgraded to the digital Calrec Alpha sound system, Logan was able to mentor and train the engineers on how to program and operate the new sound and editing equipment, at the time when NBC was merging with Telemundo. While working at the station until 2003, Logan started Under the Tower Productions which films and produces short films that emotionally engage viewers with compelling, authentic stories. In 2006, he mixed and mastered the sound design for the movie “White Powder ” and in 2008 the short film “A Part”. With his extensive experience with media and video production, it led him to write and produce the documentary, “The Rose a Sense of Place” which won the 2009 Telly award. While projection systems advance in planetariums on an international scale, Logan supports the Museum of Science and History in Fort Worth by improving and enhancing their films with color correction and encoding for the Zeiss 4K digital formats projected on dome screens. His philosophy is to create content that makes one think and embrace the journey of life.

Matthew Kendrick is a native Texan. He spent his childhood going between Fort Worth and his grandfathers farm in West Texas, in Palo Pinto County. It is here that he developed an interest in the history of this area, learning about the families that settled the land and the cattle trails that went through it. Matthew is now a professional voice talent based in Fort Worth, TX. With his experiences in script writing and voice acting, he can be heard in commercials and documentaries on radio, internet and TV all across America.

Education Texas A&M University-Kingsville Bachelor of Business Administration International Business 1993 – 1995
Magna Cum Laude, Distinguished Business Graduate
Activities and Societies: Delta Tau Delta fraternity, Delta Mu Delta National Honor Society of Business Administration.
He served as a Border Patrol Agent and then became an INS Special Agent. During that time, I was a Fraudulent Documents Instructor and worked in the Anti-Smuggling Unit. He is fluent in Spanish and a certified federal firearms instructor.
Specialties After leaving the government, He worked as a freelancer in the Dallas production market. He worked his way up to producer and then joined the group that created Torque Films.
Powered by